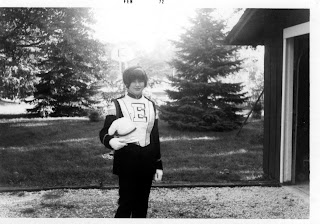 My dad played clarinet in the band (in the 30s?).   I played clarinet all through middle and high school, and even into college.  Three of my kids were in the band......and now Alana has signed up for band.   This picture is me, by the way in my high school marching band uniform.  I was maybe 15?  The big 'E' was for Edgewood High School in rural northeast Ohio. I remember the day my mom took that picture.

I've gone to many middle school and high school band concerts in Chapel Hill.  Some of the students are extraordinary musicians.  There is also a jazz band, and some of those kids amazed me!  I have always been bothered, though, by the divide----a disproportionate number (almost all) of the students in bands here are white or Asian.  I don't think it's a racial problem so much as a socioeconomic issue.  Band is expensive.  I personally bought instruments and paid for music lessons for my kids.  I know that many can't do that, and don't know how to access resources or have the time or energy to find what their child needs.  If a family can't supply an instrument, then for the most part, there is no band.  Others in the school system might dispute that---I only know what I saw, and what I see now as a mentor.

A while ago, I offered my daughter's now-idle flute to Alana.  Tonight, she called and accepted the offer, so I zipped on over to her house, flute in hand.  I showed her the parts of it, the cleaning tool, and the case.  Alana can use it as long as she wants.  I wish I could tutor her on how to play the flute, but I've never played one so I hope someone at her school will provide some one-on-one lessons.  They seem so nice and nurturing there, so I'm confident that she will learn to play this well enough to get by in band.  I'm looking forward to her first concert!