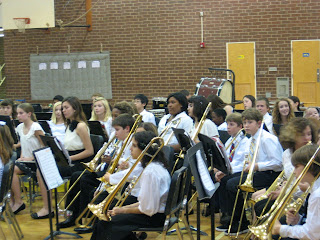 Way back, all through high school and even into my freshman year of college, I was in the band.  Then, many years later,  my kids were in the band (not in college, though).  When they were done, I thought I was done attending concerts---but tonight I went to the Culbreth Middle School band concert to watch Alana.  She's in the 6th grade, and most of those kids have been playing an instrument for a total of 3 months---they sounded pretty good!
Music is so important!!!  On many levels! I'm so glad Alana is part of this!

What was also amazing was the jazz band.  The Culbreth school band has come a long way.  When my son was at Culbreth in 1999, no such jazz band existed.  When my girls were in the band a few years later, the jazz band had about 6 kids in it (all boys).  Now there are two jazz bands and they were incredible (think kids a mere 12 or 13 years old!)  Mr. Berryhill, the band director,  is pretty incredible himself!

Like I said before, I was in the marching band, and out of curiosity, I looked up a youtube video of the current Kent State Marching band.  I can say that in 1974, we were a motley crew---sort of part of the hippie generation, but also coming from all walks of life to put ourselves through school--Kent State at that time was basically a commuter college.  The bottom line was that we were not the most precise band ever, if you know what I mean.  My "favorite" moment was when the firework that was meant to be launched over the stadium instead landed in the middle of the band during the opening, sending several of us to the hospital with burst eardrums and burns.  (The football team wasn't in any better shape, win-wise.  They had a terrible season.)
Even with all of the fireworks, snow storms during a game, and flower power attitudes, being a part of the band was one of the most memorable parts of college for me.  I never regretted joining.

Here's a current video of the Kent band---not any better.  If you watch the marching, you see a lot of crooked lines.  I guess things never change---except now they appear to be bribing students to be in this marching band (I saw 'no auditions', and 'scholarships if you join' flashed on the screen at the end of the video).   I guess I should have sent my kids to Kent and made them join the band for the scholarship money!)  Again, however, I'm sure these students love the band.  Everyone should have a musical experience while growing up!
Posted by Chapel Hill Snippets at 10:36 PM