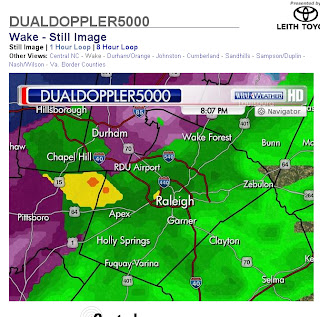 I grew up in northeast Ohio. During the month of January, it would sometimes snow every day.  Once, in college at Kent State, the high temperature was -5 degrees (we still went to our college classes).  Rarely was anything cancelled.

So, now I've moved south and I get totally amused here by the excitement that even the thought of snow generates in Chapel Hill.  A few times at school in the past years, kids have been sent home early because of impending snow (usually didn't happen).  Sometimes, it snowed and melted by 9:00 am, and the entire school day was cancelled.  On a snow day, businesses close, accidents happen, grocery stores run out of bread and milk over nothing!  The best Girl Scout cookie booth I ever ran was in front of a grocery store when snow was in the forecast.  Gotta stock up on the essentials!

We should have had a cookie booth today!   If you look at the above weather map, it's raining in the area, but school is now on a two hour delay.   It's actually the workday that's delayed---all the better.  We haven't had one flake of snow all winter, so the news stations are loving this!

(I spoke too soon. As I peek outside my window now at 8:30 pm, the flakes are starting to stick to the grass, so this truly is exciting!) 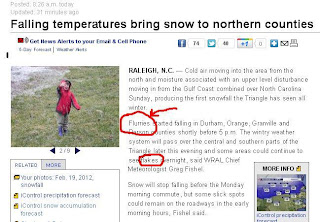 How much snow do you see in the picture to the left?
This made the WRAL headlines.