The iPad -A Portable Window

Maybe this blog entry is too basic---maybe it's good to go back to the basics. Here's my latest:

My language-impaired kids often know very little about what they are reading, or what people are talking about.  Having an iPad handy offers a window to the world and an instant visual dictionary.  Here are a few examples: The concept of 'circus' came up in a set of picture cards during a language therapy session.  The child, being Burmese, and having spent half her life in a refugee camp, had no idea what this was.  The iPad came out, google images flashed on, and images of circus performers appeared.  This offered both a joint reference for our conversation, and a springboard to further questions/answers.  The iPad made this impromptu lesson super quick and easy. 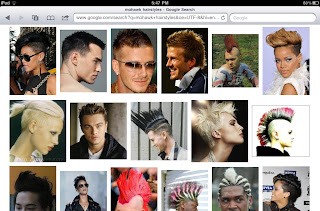 A cute boy from one of the special education classrooms came to speech sporting a mod haircut.  I mentioned how he had a 'mohawk' ---confusion and blank stares ensued.  Out came the iPad.  There are a LOT of images of mohawks in Google images.  He got it!  Days later, we still talk about his hair using this new word.   The iPad made this connection easy. 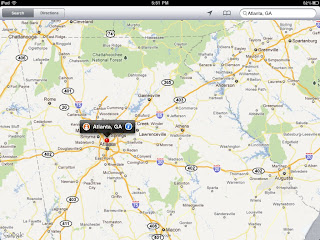 Last but not least---this last example was actually during my mentoring time.  I'm finding my mentee's concepts of geography sorely lacking---part due to a lack of travel opportunities, and part due to inadequate teaching in the schools (I teach in the same school system, so we all should take the blame).  It's also partly a problem stemming from the current emphasis on standardized testing---geography is not tested, so it's largely ignored, especially at the elementary level.  So, when I first met my mentee, she couldn't tell me what state she lived in---I think she can now.  We took a trip to Asheville, so she knows now about the mountains.  Our next trip possibly will be Atlanta!  There is a great aquarium there!  She was confused about the relationship between Atlanta and Georgia (didn't realize the fact that Atlanta is IN Georgia). I whipped out the iPad, and showed her a map, giving us something to talk about, and a springboard for more conversation about a possible trip there.

These above examples don't necessarily need an iPad---any computer would work.  However, the ease of use, the portability and the interactive touch screen, make the iPad a very convenient window to the world for my kids, for all kids.  Even for adults!
Posted by Chapel Hill Snippets at 8:41 PM