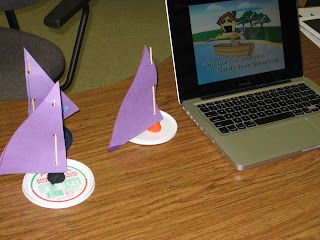 Pictello is a great app for my iPad.  Originally, I bought it to make social stories....this can certainly be done, but it's a magical way to present sequence pictures with directions and voice when making a craft or recipe.  Today, the younger kids in the EC classroom made sailboats! The following pictures are screenshots from Pictello.  I had a couple of kids make the boat on a previous day---it was a simple matter to take pictures of them making the boat with the iPad 2, import them into Pictello, and make the sequence story.  The sequence story is what today's kids followed to make the little sailboats.

Pictures were presented one by one on the iPad.  The kids could listen to the direction as often as they wanted by touching the picture. My role, as a speech pathologist, was to encourage the children to also provide either a word or sentence of their own to describe the picture.  I was amazed at what some of the kids could say!   At the end, we tested the boats in a pot of water.  Most actually floated!!! One little boy carried his boat around with him for the rest of the afternoon.

Have a nice weekend everyone!   Can you tell that I really like my iPad?

What fun things have you done with technology?
Posted by Chapel Hill Snippets at 11:43 AM