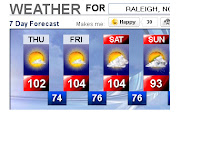 Today was the last day here before heading up north for vacation.  It was also a very hot day.  So I had a choice--do I hang out at home worrying about global warming and all of the consequences (hurricanes, drought, crop failure, famine, starvation......) or do I take Alana to see the Smurfs?  We chose the latter---not my usual kind of movie, but it provided some very interesting dinner conversation.

---apparently Smurfs live in a Utopian, communistic society most of the time and wear only pajama bottoms and hats.  They seem to grow up with accents from other parts of the world, but not like each other.  (Similar to if someone grew up in North Carolina with a spontaneous Irish accent, but has never been around anyone Irish)
---there is only one female Smurf, and she bore an uncanny resemblance to a former student of mine, but her voice was none other than Katy Perry (I know about Katy Perry now thanks to Alana)!  I was actually excited to see her name in the credits.
---There was a very evil but rather dumb wizard--and the movie was filmed in New York City so the scenes brought back memories of Home Alone 2--same bumbling badguy persona.
---Smurfs never appear to get hurt, even when zapped really, really bad by the blue essence zinger laser.
---Joan Rivers showed up---she hasn't changed for about 30 years.
---Cats know how to talk, sort of.
---Leaf blowers suck in and blow out---the first I've ever seen!

I guess I'm trying to analyze this too much.  I would never have gone to this except that my mentee wanted to---and the laughter I heard made the movie going experience worth every penny!  I did enjoy the scenes from New York City, and want to go back soon!  with Alana!
Posted by Chapel Hill Snippets at 10:15 PM