I like to encourage my speech kids to play games, explore new things, and improve communication skills through play.  My little guy who liked Cariboo and Funky Fingernails (previous posts), has now begun to explore Acrobats.  You won't find this new---I bought mine from a thrift store.  You can find used versions at Amazon here.
This has been a popular game in my room for years.  The kids like the challenge of carefully hanging the different color bats, the rules are simple, and there is an element of suspense before all the bats crash down to the table.  Lots of laughter happens then! 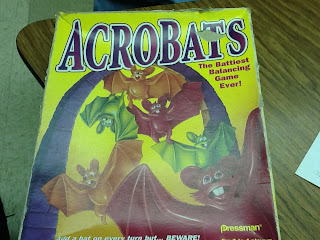 Official rules from BoardGameGeek.com are : To start, place the magnetic bat on the top of the Bat Tower. Roll the bat die to see what color bat you have to add on your turn. You may be lucky and have to place a small one or not so lucky and have to place the biggest bat of all. As each player goes, the weight of all those bats begins to tug on the top bat so, be careful! If your bat is the one that makes them fall, you get a Bat Token. When a player has 3 Bat Tokens they're out of the game and the player who has the fewest Bat Tokens at that time wins! 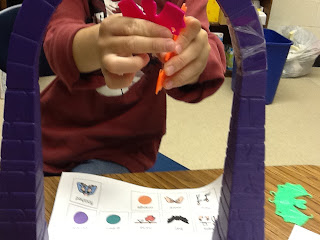 Unofficially, in my room, the rules of the game vary depending on the student level.  In this case, my guy was hanging the bats carefully and making sure they didn't fall.  We took turns!  He requested the bats by color.  This was successful in that he was interacting with me, playing with a toy in the way it was intended to be used, imitating my actions, and staying engaged.
Goals are obviously to add more functions to his communication and engagement, but first things first! This kid essentially can often unfortunately sit and show no interest in any toy, so during this activity I was excited!  I also plan on letting the teacher borrow this and other games of interest, so she can play them with him, and he can play them with other kids.