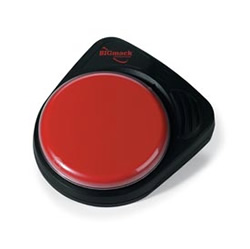 With an app called TapSpeak Button, the iPad can be converted to a single switch device.  Multiple messages can be stored with easy access to each one as needed.  In addition, the message length can be unlimited---you can record a whole song! The app is a bit more expensive than most, but far cheaper and more versatile than the one hundred dollar button that I was previously using. There is still a place for the single message buttons---if you don't have an iPad for convenient student use, or if a child really needs to have a button near him to communicate.    For my language groups; however, TapSpeak has been nice.
I had a couple of sweeties in my room today.  We made little ghosts  (see previous post about this).  To expand on this activity, I recorded a little ghost song into TapSpeak.  The kids loved it!  They were starting the song on their own and were using the little ghosts to follow along, and shout  'Boo'!   This activity would be perfect for your younger kids while TapSpeak is a great app for all ages.