The Reader in my Room

The Reader is the name of a great movie starring Kate Winslet who won an academy award for her role as a former Nazi convicted in a war crimes trial.

Go watch this if you have time---it's a great movie, but now I want to tell you about someone else.


I  have a kindergarten child on my caseload that I could call "The Reader"----he should be a poster child for the American Hyperlexia Association.   His word reading is extremely high, spelling perfect, conventions such as capital letters and periods errorless.  He can memorize stories, scripts, and videos.  On the other hand, basic communication is difficult for him; social skills are lacking; tantrums abound.  Although he reads the words with great expression, answering an oral question is hard. He is currently in an Exceptional Children separate classroom, in case you are curious.

Since inclusion is the way to go with most kids, I've started taking him into a regular kindergarten classroom for guided reading and have been pleasantly surprised with how well he behaves, navigates the classroom, gets his books, and comes to the reading group.  The regular education teacher does a great job modifying her questions to him, and eliciting words using fill ins and visuals.  Once the reading group is finished, I take the same book, and use it with the child during a language therapy session (on a different day).  The teacher then uses it again for a re-read, and his ability to participate in the group improves.

Yesterday, in guided reading, the group read a book (level C if you know Fountas and Pinnell) named "Using Tools".  The child really needed some extension activities with this, so today, he and I wrote our own 'tool book'.  Actually he wrote it himself, using an app called Book Creator.  For a child who really has severe communication impairments, he was effortlessly able to write a book above what typical kindergarten students can write..... in ten minutes. The sentences he wrote were different than the original guided reader---not copied in the least and had no carrier phrase, although they did follow the same syntactical pattern.
Take a look!   He is also a skilled typist, and figured out the app instantly.  I was amazed, and so was the regular kindergarten teacher.  She immediately started talking about increasing inclusion time and I couldn't agree more!
I have screenshots of his book, along with a couple of other images..... 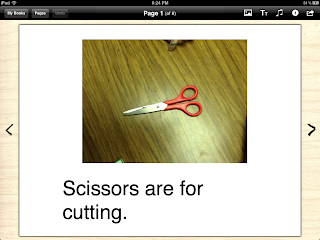 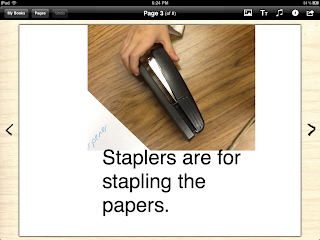 For my speech friends, any exciting treatment ideas out there for kids with hyperlexia?  What are your thoughts on inclusion?