I've been in speech therapy a long time!  I graduated from the University of Kentucky in 1984.  At that time, augmentative communication wasn't discussed, there was no AAC class, and personal computers were just beginning.  Forget Google images, forget Boardmaker, and the internet didn't exist.  Pictures?  You either drew them yourself, or you took a picture with your camera and waited to get the actual film developed (a week?). I spent quite a bit of time searching magazines for photos to cut out and glue.


Fast forward to 2011......Last week, I sat in a speech session with an adorable little boy--seriously autistic, pretty much nonverbal. He typically didn't seek out toys or anything except candy (he was able to use Proloquo2Go to request candy).   I have tried for about a year to interest him in something, anything! Occasionally, I would get a some sustained interest and we would use that for a while--adding a picture to his PECS, interacting, holding out for eye contact, reaching, requesting.   This week, I dragged out my Cariboo game.  For those of you who don't know Cariboo, it involves opening doors, retrieving balls, and eventually winning a treasure.  There are more complicated rules, but for kids who are not into such rules, just the act of using a key to open a door to find a ball makes the game fun.  My little boy loved the game!  We played it several times over two days!

Why am I writing about this?  Because, I was able to use my iPad 2 to instantly make a communication board with Proloquo2Go (with the kid sitting with me while I did this).  I made the board during the speech session and the boy used it to then ask for the various game pieces.  What a difference 25 years of technology development makes!!!!!  I made the board in about 3 minutes.

Here is a brief tutorial.  Go to the edit mode.  You want to create a category for your game.


You now have a Cariboo page (or another activity page if you want).  Now you can make an instant communication board.  Here is mine----it literally took 3 minutes to take the pictures.  I added a few other icons too, and my boy used this during the session.  It was instant feedback, teaching, and reinforcement for my boy.  He knew instantly to touch the pictures to get the key and the ball, we took turns opening the doors, and he was additionally using a speech approximation for the key and saying ball while touching the ball picture.  I modeled the other language for him (All done! This is fun!). 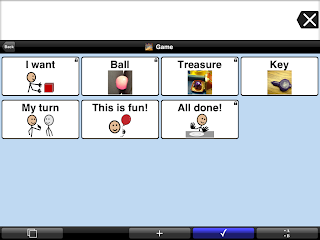 Posted by Chapel Hill Snippets at 9:45 AM