Happy Father's Day tomorrow to all the dads I know-- especially to my husband and his wonderful dad!

It's a little hard to write much more than this--thinking of Father's Day sends me down a twisted path of memories, some sweet, and others a bit painful.   I didn't actually grow up in the stereotypical household of the "Leave It to Beaver" era. (Who did?)  Life had many bumps (some would say mountains) including the early death of a mother, difficulties with older siblings, many relocations, parental job loss, the list can go on.

Reflecting back on my dad, and knowing what I know now about autism, I'm nearly 100% certain that he was an individual with Asperger's Syndrome, which caused many of the family dynamic difficulties, and the problems with coping with life's bumps.  For those of you who are unfamiliar with this term, individuals with Aspergers often have high intelligence, but many problems with pragmatic language and social skills.  My  personal belief is that high functioning autism and Aspergers describe the same disorder--others may disagree, but the impact on a family and the children is huge regardless of the terminology.

My father was highly intelligent.  He was also a World War II veteran.  He had a Masters Degree in metallurgical engineering from Penn State.  He married twice (first wife, my mother, died) and had five children.  He loved classical music and opera, played the piano, and the clarinet. He worked in the steel industry as a metallurgist. He enjoyed gardening, biking, hiking, and Scrabble.  With a profile like this, you would think that we would have all grown up like the Brady Bunch---minor squabbles at most.  The problem with Aspergers is that although the person may have a highly developed vocabulary, the ability to carry on a conversation with one's wife and children, communicate feelings, read other's nonverbal cues, and talk about a topic of another's choosing are all impaired.  Blurting out odd things in public places was a bit embarrassing to his kids (like me), and talking about the same odd thing over and over again was very common (e.g. 'core wash' which was something he was working on in his work--few people really cared much about it or understood it).  He had difficulties holding onto jobs, resulting in disruptive relocations every few years.  As I'm thinking back now, I could add tenfold to this list of his difficulties.  No one, however, really understood the cause of his social issues, but he, along with the family, was frustrated.  As I grew up, I purposefully distanced myself from both him and everyone else in the family, partially due to all of this. Oh, the guilt I feel now! 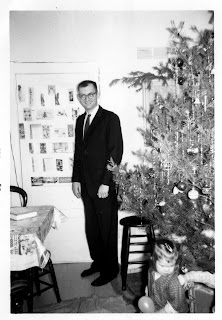 I have a wish-- I would love to go back in time with the knowledge and empathy I feel I now possess, and talk to my dad.  I'm not sure what we would talk about, but I would hope that I could look past the symptoms of the disorder, and talk to him more as the intelligent, nice person that he was.  That's all.


P.S.  I'm not really one to write this type of thing, but I guess Father's Day just brought it all out.   Happier writing will come next time!
Posted by Chapel Hill Snippets at 6:23 PM